When you see a White German Shepherd, the first question that comes to most people’s minds is whether this breed is an albino.

The answer, very simply, is no.

The White GSD lost favor in Germany, but spread to the United States and Canada, and finally throughout the world. The American Kennel Club (AKC) and United Kennel Club (UKC) both included the white color dog in the German Shepherd dog breed standard until 1999, when they agreed it was a separate breed.

The White German Shepherd carries the recessive white gene. This recessive gene is the same as a human having the recessive blonde gene. The pigment is more likely to occur when a purebred of two white GSDs.

The white coat of this GSD has never really made a difference in its popularity, which is why it remains as popular as GSDs with the familiar black saddle or coat.

What Is a White German Shepherd?

Unlike the black GSD, whose color is solid black, the White German Shepherd dog possesses the white recessive gene, masking their true color and pattern, which causes their coats to be white.

Many people may think that the White German Shepherd is different because of its color, which is not the case.

The White German Shepherd is medium-sized and reasonably muscular. An adult male is usually between 22 and 26 inches high at full growth and weighs approximately 77 to 88 pounds.

These figures indicate a healthy weight, and anything less than this average requires attention.

A White German Shepherd‘s coat is usually long haired, and course to the touch and can sometimes have a feathery appearance.

Apart from their appearance, and because the White German Shepherd is a large dog breed, you must exercise it a lot. Staying cooped up in the house, or a small area, with a lack of activity, will result in a very unhappy GSD.

If you are interested in introducing a White German Shepherd to your family, ensure that you are compatible with this animal. Compatibility means that you are not an inactive person or are part of a sedentary family.

Lack of exercise and socializing your GSD will result in your pet becoming aggressive towards you, your family, and other dogs, which can be highly unpleasant.

Ensure none of the people in your family suffer from any allergies or chronic illnesses. GSDs have a double coat and shed quite a significant amount of hair and dander, especially when they shed their undercoats.

This dog breed can also protect a herd of animals, you, and your family from any harm or danger.

Dog breeders advise that you first introduce your pet to the family to create a solid bond as White German Shepherd‘s require a lot of attention and seek emotional attachment.

Using the White German Shepherd as a working dog, for example herding, is rewarding to both owner and dog. These dogs train with a whistle and specific hand gestures.

GSDs will make any owner proud due to their loyalty and great companionship, plus they will enjoy exercising in the outdoors.

The White German Shepherd is a highly energetic dog and requires significant daily exercise. They also make great workout partners as they can keep up with any exercise pace you care to set.

So, take your GSD out in the fresh air regularly for a jog or allow them to follow along as you cycle on your bike. White German Shepherds also enjoy playing Frisbee, fetch, and ball.

This destructive behavior will not stop until you adequately exercise your GSD.

Due to its high-energy levels, it is essential to help your White German Shepherd burn off excess, pent-up energy daily to avoid unnecessary aggression and frustration.

It will also did a lot of high-quality dog food to fuel it’s energetic nature.

Although we have established that White German Shepherd dogs are almost identical to the regular German Shepherd regarding their general appearance, there are quite a few differences in their hair and care and characteristics.

The hair and care characteristics differ quite a bit between the two breeds of GSD.

How To Care For White German Shepherd

Especially as the weather warms up, you will notice the excess shedding of fur all-around your house.

GSDs are known for shedding their fur coats, especially during the season change from winter to summer.

Therefore, it is crucial to keep your White German Shepherd brushed daily to avoid the frustration of unwanted fur all over your furniture and home.

Limit your GSD’s bathing as too much bathing dries out their natural skin oils resulting in irritated skin and even more hair loss.

To stay on top of the cleaning up of fur, invest in a good quality vacuum cleaner. A vacuum cleaner that has a strong enough suction to pick up all unwanted hair is ideal.

If you will be grooming your White German Shepherd, it is essential to start the grooming process and routines from when your GSD is a pup.

Regular cleaning out of ears and trimming nails should be a daily routine for you, so it is best that you get your GSD accustomed to these grooming processes from a young age.

White German Shepherds would go as far as risking their own lives for their family and owners. That is just how loyal they are.

Exuding obedience, courage, faithfulness, and confidence, White GSDs are a serious yet well-balanced breed. White GSDs bring plenty of love and joy to their owners and serve as great guard and herding dogs. They also make for loving family pets.

White GSDs are well-behaved and can be well-trained dogs, they will react in situations that call for protective action. Never underestimate a White German Shepherd.

Although they may seem shy, they are highly observant dogs and can be very possessive and protective over their family and owner.

White GSDs are incredibly adaptable to most events and environments and possess an energetic and fun-loving personality, which their owners typically adore.

According to the American Kennel Club, a GSD is one of the top registered breeds. They are immensely popular and hardworking dogs. German Shepherds make fantastic herding, police, and military dogs.

They are known to be highly intelligent, loyal, and possess a protective nature, making them a top-rated family dog. White German Shepherd puppies will form an attachment with their family.

The most common health problems that White German Shepherds face are hip dysplasia and elbow dysplasia, which is usually hereditary and can develop at any age. The symptoms are, however, primarily noticed in older dogs.

Other illnesses have also been noted, such as airborne allergies, various eye diseases, fleas, and food allergies, among several others.

White GSDs are also known to develop a mal-absorption syndrome.

Lupus and Congenital Spine disease are two rare conditions found in White GSDs, problems which are prevalent among all GSDs and impact lifespan.

Should you have reason to suspect that your pet is at risk of developing any of the diseases or allergies mentioned, seek immediate attention from your nearest vet.

Your vet will run all the blood tests necessary to determine your pet’s health status and do all the appropriate examinations on your dog to obtain the correct diagnosis.

Furthermore, your vet will be able to advise you about how to help treat your dog and map out a plan to assist your GSD in living a happy, comfortable lifestyle while living with their diagnosis.

With a gleaming pure white coat, black lips and mouth, and a complete GSD look, this color variation is striking.

White German Shepherds are a friendly and loyal breed of dog. These puppies are genetically identical to the tan and black German Shepherd and are just as protective and enjoy being around their human family.

Your White German Shepherd puppy will make an excellent guard dog as well as a cuddly friend to play with on the sofa.

These fluffy animals are worth the investment of your time and energy, despite their high grooming and exercise requirements. Most pet lovers would love to share their space with one of these beautiful animals! 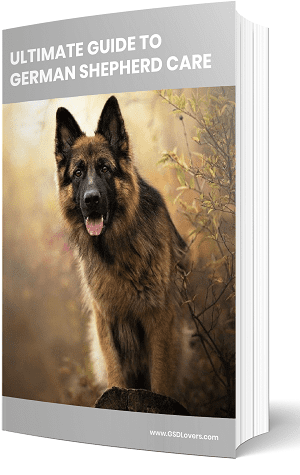